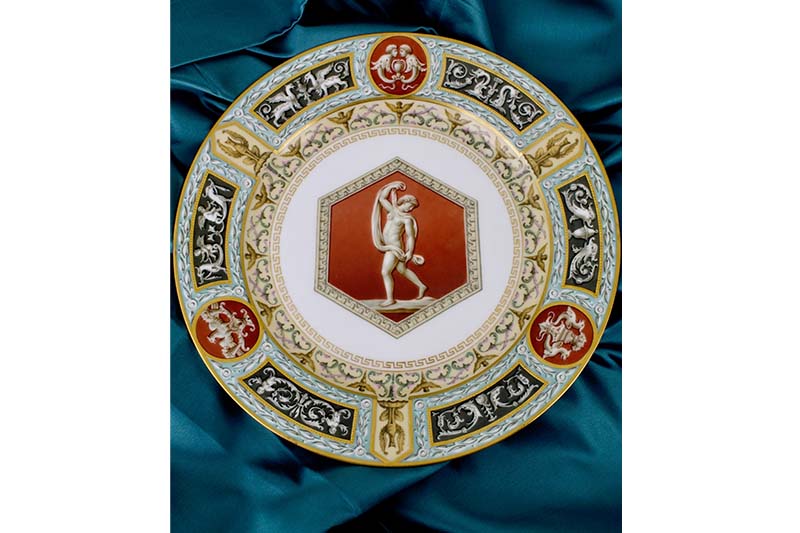 A pair of Imperial Russian hand painted porcelain dinner plates from the Raphael Service – these extremely fine and rare plates from the Raphael Service were commissioned by Alexander III and later Nicolas II of Russia for the Catherine Palace at Tsarskoye Selo. This was the most important and expensive commission ever made by the Imperial Porcelain Works and represents highest level of achievement of the works at this time.

This 50 person service consisted of five different sized plates per place setting and each piece was completely and painstakingly hand painted, the entire commission taking twenty years to complete.  Each year the completed pieces were presented at Christmas to the Emperor; the cipher and year to the back of each piece denoting to whom and what year they were presented.

The decoration (and hence the name) is inspired by Raphael’s Frescos in the loggias of the Vatican which were later recreated at the Hermitage, and consists, on these particular plates, of a central hexagonal medallion with an ombred ground in a rich burnt orange with an image on one plate of a nymph dancing, and the other showing Gabriel blowing a horn to signal the return of the Lord to earth.

These are surrounded by a repeating frieze of a Greek key pattern below a cream border decorated with Triae and overlaid scrolling leaves in pink and sea green. This sits below a light turquoise border with laurel borders around friezes of dolphins, scrolls, putti and  grotesques on a charcoal ground within beaded gilt borders and interspersed with pointed reserves of winged Simargls.

These are alternated with three round medallions with the same rich orange ground as the centre and decorated with Putti in various poses on one plate, and with armorial style motifs on the other.  Both plates are richly gilded with borders and rims. At the back of the plates, both the rim and the footrim are gilded; one plate showing the cypher for Alexander III along with the year 1894, and the other, with a cypher for Nicholas II and the year 1903. – each plate measures 243mm in diameter – 1894 and 1903 Russia – Condition notes: in excellent Museum Quality condition with only very light wear showing mainly to the gilding in the form of very fine scratches and some very minor discolouration. 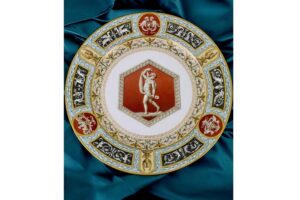 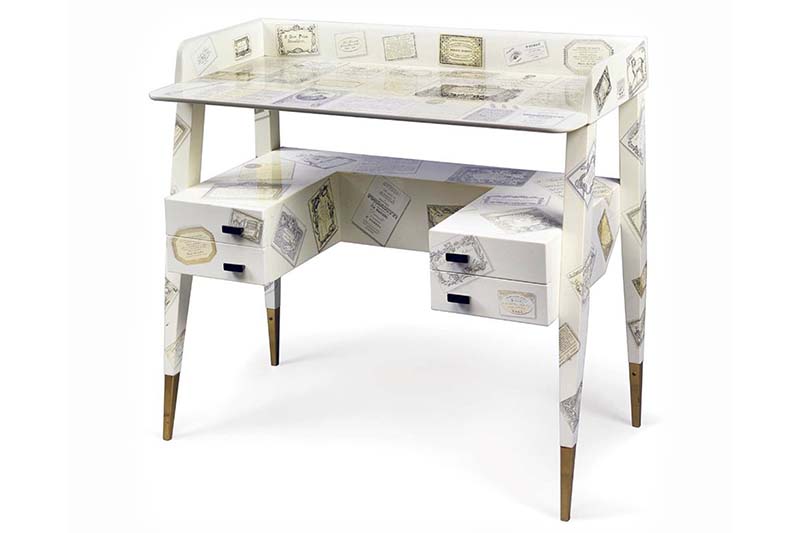 Desk by Piero Fornasetti and Gio Ponti From Apologue

Desk by Piero Fornasetti and Gio Ponti From Apologue