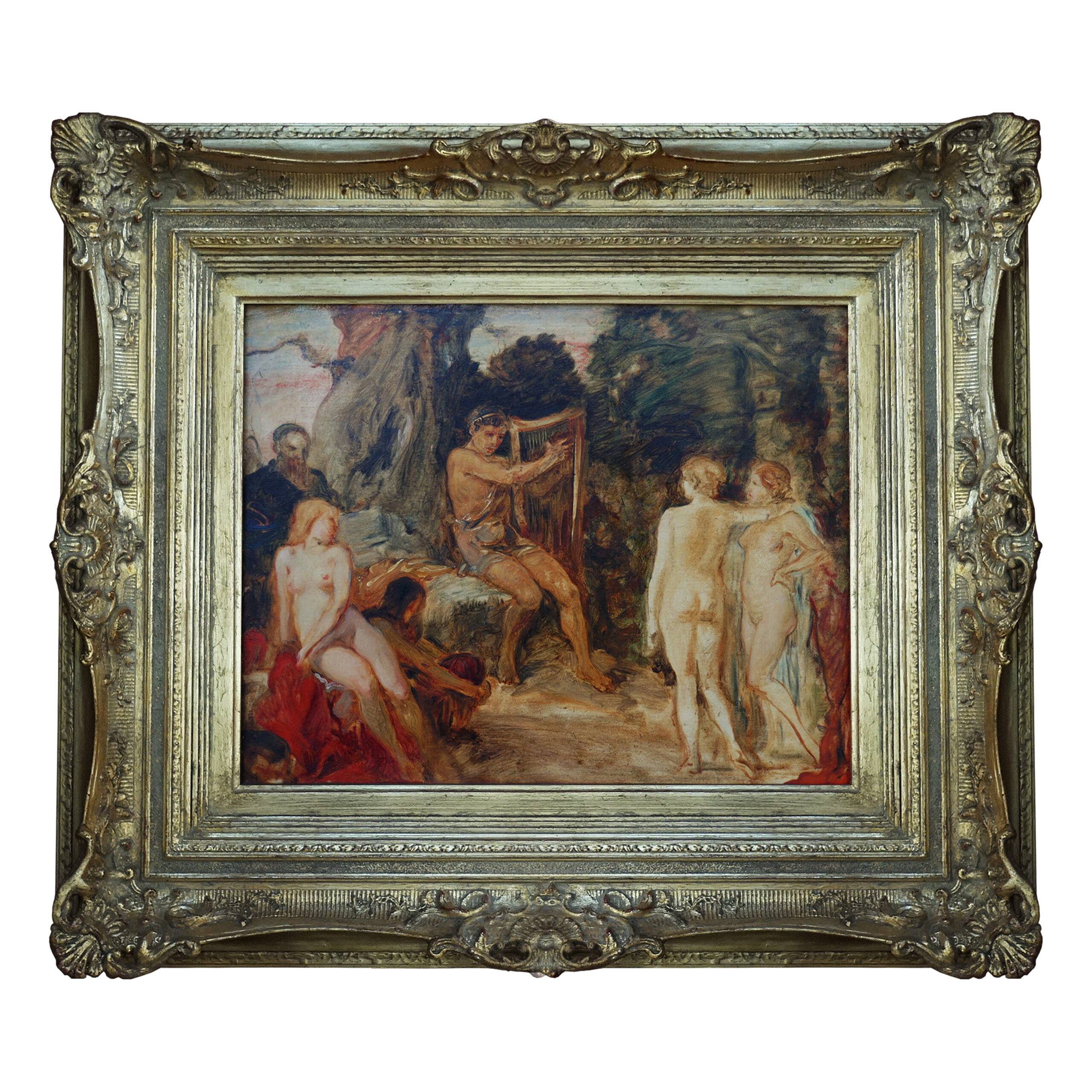 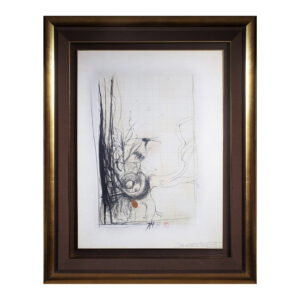 This impressive, original mixed media study is extremely RARE!! It was part of a series of Bird studies based on the work of French poet, Charles Baudelaire, including “Baudelaire’s Bird” (1973) & Butcher Bird With Baudelaire’s Eyes” (1972). They were completed around the time he constructed his epic, self-portrait “Alchemy” (1972-73).

“David, Genius, is really knowing which remark it is that convince another person that one is in possession of genius. That’s all, in other words genius is the most sensitive of human discovered inventions”

The inscription is directed at his infamous friend and philosophical sparring partner, David Litvinoff… When Whiteley lived in London, he befriended Litvinoff, a particularly shady character who maintained the company of the London Underworld, particularly the notorious gangsters, the Kray Twins. He also introduced him to associates Lucien Freud and Francis Bacon, no doubt influencing his craft. Litvinoff visited Whiteley in Sydney, where they mingled at the famous, and influential Yellow House of artists in Potts Point. 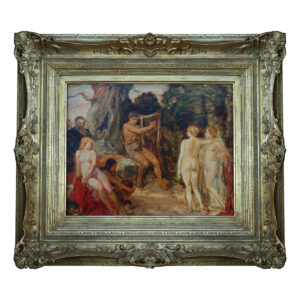 Kaulbach was a prominent German Genre Painter, and favourite artist of Adolf Hitler. He was a portraitist and historical painter; son of Theodor Friedrich Wilhelm Christian Kaulbach (1822–1903), the court painter at Hannover, and the great nephew of Wilhelm Kaulbach, another prominent member of the Kaulbach family of artists. He learned to paint from his father, and later was a student of August von Kreling at the Kunstgewerbeschule Nürnberg (Nuremberg school of arts and crafts), a predecessor institution of the Academy of Fine Arts, Nuremberg under influential German painter, Franz Von Stuck. He is famous for his decorative and enthusiastic portraits of predominantly feminine society in the French style of the 19th century. His portraits were mostly commissioned works, the portrayed almost exclusively members of the highest German and American social circles. He was a member of the Academy of Arts in Berlin and director of the Munich Academy. However, he is perhaps best known for the fact he was one of Hitler’s favourite painters. In fact, Kaulbach’s epic masterpiece “Triumph Of Music” was the pride of the Third Reich Chancellery dining room, and Hitler requested to face the painting during every meal. It was destroyed when the Führerbunker was bombed during WWII. This impressive, historically important study was likely a draft for his masterpiece, as few paintings exist of Kaulbach’s work on the theme of music. 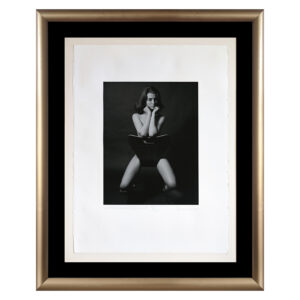 Morley is a famous, influential British Photographer and Artist. He was best known for his artistic, surrealist portraits of actors, models and artists. His photo of model Christine Keeler is one of the most iconic fashion & political photography moments of the 20th century. He was a significant British mid-century artist, in a new wave of contemporary artists emerging in the 1960s alongside David Hockney, Peter Blake & R.B. Kitaj. In 1961, Christine Keeler was an unknown, 19yo British model & showgirl, when she was embroiled in a high profile sex scandal with John Profumo, the British Secretary of State for War, & Soviet naval attaché Eugene Ivanov. Pressure from Fleet Street forced Profumo’s resignation, drove Stephen Ward to suicide, Keeler was imprisoned, – the Government was brought into chaos & disrepute; a precursor to the Bill Clinton/Monica Lewinsky scandal. Morley photographed Keeler in his studio above The Establishment at the behest of Peter Cook as publicity shots for a future film, Profumo Scandal, which was not released in the UK. As Morley has noted: “My own driving force has always been more emotional than intellectual and so the Sixties was also my period in that sex became the great leveller.” This RARE iconic, hand-signed & numbered platinum print on Arches paper was produced in 1994, & limited to 25 prints. 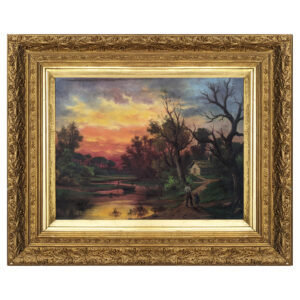 Tischbauer is a forgotten, award-winning French-born Australian Colonial & Theatre Artist. He trained at the famous L’Ecole De Beaux Arts in Paris as a scene painter and designer, & worked at the Paris Opera before becoming involved in the Paris Communes of 1871, resulting in him being transported to New Caledonia as punishment. He came to Sydney in the late 1870s with his friend, prominent artist, Lucien Henry. He held his first Australian solo exhibition  ‘Sketches in Water-colours for Churches & Apartments’ in 1880, & worked as an instructor at the Sydney School Of Arts & Technical College. He befriended young Australian artist, John Peter Russell who had recently returned from Paris, where he had befriended & studied with Henri De Toulouse Lautrec, Emile Bernard & Vincent Van Gogh. At the Third Annual NSW Art Society Exhibition in 1883, Tischbauer showed his greatest masterpiece “View Of George St., From the North Side of Wynyard St. Looking South” (1883), a large, detailed work, in which he included a small rendering of his friend John Peter Russell in the foreground (image 5, centre). The work is now owned by the State Library Of NSW. The same year, Russell showed his “Portrait Of Alfred Tischbauer Esq.” (1883) one of the handful of portraits he completed in his lifetime. Russell’s depiction of a wild Tischbauer makes his portrait of his friend Van Gogh (completed three years later after he returned to Europe) makes Van Gogh seem like a sane, restrained man in comparison (quite the feat with what we know of Van Gogh’s personality). Tischbauer continued to exhibit in the late 1880s, but turned his focus to scenery painting for the theatre, to great acclaim and attention of the National Press. However his luck would soon change. In late 1891, Tischbauer’s theatrical design career faltered after he was named in the suicide note of Selina Palmer; a young woman, employed by Alfred Dampier, whom Tischbauer had befriended; and had to endure public scrutiny of the nature of their friendship during the coronial inquest. Tischbauer continued his work for Dampier after the tragedy, until the collapse of Dampier’s business in 1893 caused a rift between the two men. Following this debacle, Tischenbauer was employed as Director of the Sale School Of Arts, in Gippsland, Victoria. In January 1897 he married Harriet Watson at Footscray in Melbourne. At the start of the twentieth century Tischbauer left for New York where he became a successful scenic artist and theatrical designer. Tischbauer and his wife later moved to California, where he worked for the American Film Company in Santa Barbara. He died in Los Angeles in February 1922 and was buried in the Forest Lawn Memorial Park in the Hollywood Hills. Harriet Tischbauer returned to Australia later in 1922.

This interesting landscape was produced when Tischbauer was Director at the Sale School Of Arts, shortly before he left for America to pursue success as a set designer. This work was exhibited at ‘The Valuable Collection Of Oil Paintings by Mr Alfred Tischbauer’ at Our Art Galleries, 361 Collins Street, Melbourne in December 1899. 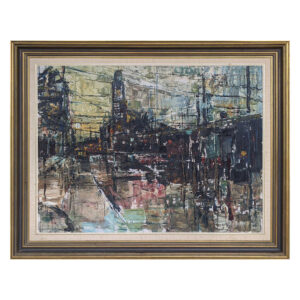 Bush was an influential, award-winning Melbourne Artist, and Official War Artist. This striking streetscape comes from Bush’s “Dusk, Night & The City” Series (1956-62), inspired by the rapid growth of Melbourne’s infrastructure & cityscape in the wake of the Summer Olympic Games of 1956; Bush hoped to celebrate the emerging ‘Modern Metropolis’ of Melbourne. This painting was a finalist in the Wynne Prize, 1960. Bush named this series his most important works, his contribution to the Australian narrative, that he hoped to be remembered for! 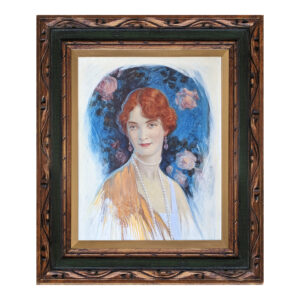 Spence was a prominent, award-winning Australian Portraitist & Illustrator. Charley was the daughter of mining magnate, Philip Charley, who was part of the ‘Syndicate Of Seven’ who discovered silver in Broken Hill, leading to the establishment of BHP, from which Charley made his fortune. Spence painted portraits of Adeline multiple times. Philip built the mansion Belmont House in North Richmond, now St. John’s Of God Hospital. 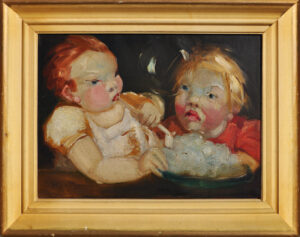 Van Meegeren was a Dutch painter and portraitist and is considered to be one of the most ingenious art forgers of the 20th century.  Despite his life of crime, Van Meegeren became a national hero after World War II when it was revealed that he had sold forged art to Hermann Göring during the Nazi Occupation of the Netherlands. During World War II, wealthy Dutchmen wanted to prevent a sellout of Dutch art to Adolf Hitler and the Nazi Party, and they avidly bought van Meegeren’s forgeries, thinking them the work of the masters. Following the war, the forgery was discovered in Göring’s possession, and Van Meegeren was arrested on 29 May 1945 as a collaborator, as officials believed that he had sold real Dutch cultural property to the Nazis. He was convicted on falsification and fraud charges on 12 November 1947, after a brief but highly publicized trial, and was sentenced to a modest punishment of one year in prison. Van Meegeren was so famous, his own original works we widely forged. “Children Blowing Bubbles” is an original Van Meegeren painting, rather than one of his more famous forgeries. His story was recently told in the movie “The Last Vermeer” starring Guy Pearce at Van Meegeren.